Major League Baseball is working on a plan that would reduce travel for umpires during the condensed 2020 season.

According to sources, it's possible umpires could drive from city to city, work entire homestands and even stay at team hotels.

Usually, a crew works a series then moves on, making sure to rotate around the league so as to not have grudges based on the same teams seeing the same umpires all the time.

A crew of three umpires will report to each summer league camp on July 10.

Mike Leake is opting out of the 2020 Major League season, his agent said in a statement.

Leake, 32, was scheduled to make $16 million for a full season and was positioned to be fighting for a spot at the back end of the Arizona Diamondbacks' rotation. He will be a free agent next season.

"This was not an easy decision for Mike," agent Danny Horwits said in the statement. "He wishes the best of luck and health for his Diamondback teammates this season and he's looking forward to 2021." 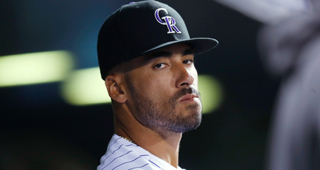 "The COVID-19 pandemic has made this baseball season one that is a risk I am not comfortable taking," Desmond wrote at the end of a lengthy social media post that hit on his experiences as a biracial man in America.

"With a pregnant wife and four young children who have lots of questions about what's going on in the world, home is where I need to be right now," Desmond wrote. "Home for my wife, Chelsey. Home to help. Home to guide. Home to answer my older three boys' questions about Coronavirus and Civil Rights and life. Home to be their Dad."

Major League Baseball is close to receiving approval to have the Toronto Blue Jays play in Canada amid the coronavirus pandemic.

Ontario Premier Doug Ford said city, provincial and federal authorities "kind of gave their approval," but the Blue Jays are waiting for a letter of support from the federal government.

Ford said he has been in conversation with Blue Jays president Mark Shapiro all weekend.

MLB requires an exemption, as anyone entering Canada for nonessential reasons must self-isolate for 14 days, and the U.S.-Canada border remains closed to nonessential travel until at least July 21. 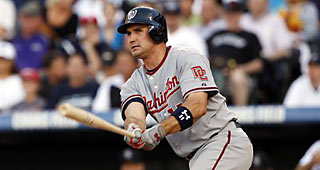 Ryan Zimmerman has shared that he's undecided on whether or not he'll play for the Washington Nationals during the 60-game abbreviated season.

Zimmerman has a newborn child and his mother is considered a high-risk individual.

"I'm still deciding whether to play. When it comes down to it, it's a decision not just for me, but for my family as well. I have a 3-week-old baby. My mother has multiple sclerosis and is super high-risk; if I end up playing, I can pretty much throw out the idea of seeing her until weeks after the season is over," he said.

"There's a lot of factors that I and others have to consider. I don't think there's a right or wrong answer; it's everybody's individual choice. At the end of the day, does a player feel comfortable going to the field every day and -- in my case, more importantly -- feel comfortable coming home every day and feel like they're not putting anyone else in danger? … I don't want to be a pessimist about this. I hope that, whatever I decide, the season goes off well, nothing happens, nobody gets seriously sick. But there are a lot of moving parts and a lot of variables we're not going to be able to control. That's what we need to assess."

The Detroit Tigers are working to finalize a contract agreement with first overall pick Spencer Torkelson, according to sources.

The Tigers released their 60-man player pool for Summer Camp on Sunday and Torkelson wasn't on it.

Torkelson, 20, is expected to be added to the player pool list and join the Tigers in workouts at Comerica Park, which officially begin Friday for pitchers and catchers and a few days later for position players.

Major League Baseball and the MLB Players Association are no longer negotiating the terms of a modified season, but the union remains open to the possibility of discussing an expanded postseason.

"I would simply say that if there's interest to discuss something, I'll be available to discuss it," Tony Clark said in an interview.

Baseball is unlikely to adopt an expanded postseason anytime soon. The current collective bargaining agreement expires after the 2021 season.

The Texas Rangers were the first known Major League team to bring workers back to the office and less than two weeks later "several members" of the organization have tested positive for the coronavirus in recent days.

Tarrant County, where the Rangers are located in Arlington, as a whole has set a new weekly record for infections in three consecutive weeks. Nearly half of its 10,000 total cases have been recorded during that time.

The Washington Nationals are scheduled to host the New York Yankees on Opening Day, sources have confirmed.

Major League Baseball has yet to finalize an official schedule.

Players and staff members will start traveling to training camp sites on July 1.

The Korea Baseball Organization will be trading cardboard cutouts for real fans soon.

South Korea announced Sunday it will begin reopening stadiums to spectators this week. A league official said the league is working to welcome fans back as soon as Friday.

"We haven't yet established specific guidelines, and we have to monitor the situation with the virus, but we expect to have fans back in the stands by Friday at the earliest," the league's secretary general Ryu Dae-hwan said. "We'll make the health and safety of our fans the No. 1 priority."

The KBO aims to open stadiums at 30% capacity before working its way up to 50% in the coming weeks.

Astros Planning To Have Fans At Game In Texas

MLB Submits Plan For Blue Jays To Play In Toronto

Rob Manfred: We Owe It To Our Fans To Be Better

MLB Has Yet To Submit Plan Needed To Play In Canada

Phillies' Coronavirus Cases Up To 12 After Four More Positive Tests

Texas Rangers Won't Change Name After Column Calls For It