The Major League Baseball Players Association rejected MLB's last proposal on an international draft on Monday, the deadline for both sides to reach agreement.

The absence of a draft means the qualifying-offer system and the international signing period will each remain as is.

The two sides exchanged a total of four proposals this month, including two last weekend, and were consistently far apart on the amount of money that would be guaranteed to future international amateur players.

The gap reportedly never got closer than $69 million.

With a deadline looming, MLB on Sunday submitted what was billed as a final offer regarding an international draft, sources told ESPN.

The league increased the amount of money that would be guaranteed to the top 600 international players by $10 million, going from $181 million to $191 million, sources said. But the two sides remain very far apart, and the prospect of a deal seems unlikely.

It is unclear whether the MLB Players Association would submit another counter Monday, or whether the union would take MLB's latest offer seriously enough to submit it to a vote among its player leadership.

The Baltimore Orioles came to terms with No. 1 pick Jackson Holliday on Thursday, according to a source.

Holliday will receive a record bonus for a high school player.

The deal is worth $8.19 million, just under the slot value for the top pick at $8,846,900. The club has not confirmed the agreement, which is pending a physical.

The Baltimore Orioles drafted Jared Beck from Saint Leo University with the first pick of the 13th round on Tuesday.

Beck, a seven-foot left-hander, would be the tallest player in Major League history.

He struck out 105 batters in 68 1/3 innings for Division II Saint Leo this season, posting a 3.95 ERA. He's also pitched summer ball for the Savannah Bananas.

"Jared's a really interesting case," Orioles draft director Brad Ciolek said. "Obviously, he's a little bit of a bigger guy, and that might take a little bit more, I guess, in terms of delivery, refining his mechanics. But we have faith in our player-development staff, our pitching coaches, that they'll be able to get the most out of his ability."

The first two picks in Major League Baseball's 2022 draft, Jackson Holliday and Druw Jones, have agreements in place with their respective clubs, according to a report.

Both players are expected to receive signing bonuses that exceed $8 million. They are also both represented by Scott Boras.

Holliday, a prep shortstop from Oklahoma and the son of former All-Star Matt Holliday, was selected No. 1 by the Baltimore Orioles.

Jones, a prep outfielder from Georgia and the son of Andruw Jones, was chosen No. 2 by the Arizona Diamondbacks.

The Chicago Cubs drafted Mason McGwire, son of 12-time All-Star Mark McGwire, in the eight round on Monday.

Mason, a right-handed pitcher out of Capistrano Valley High School in California, is committed to the University of Oklahoma, where his 19-year-old brother Max is an infielder.

There's no indication yet if Mason plans to turn pro, but teams seldom use picks in the top 10 rounds on players they think are unsignable.

The three-day Major League Baseball draft kicked off on Sunday, with the first round completed.

The Los Angeles Dodgers didn't have a first-round pick, but the New York Mets had two thanks to a compensatory pick awarded for not signing Kumar Rocker in 2021.

Here is a summary of the first round:

The Baltimore Orioles made high school shortstop Jackson Holliday the first selection in Major League Baseball's draft on Sunday, but the biggest shock came with the No. 3 overall pick, as the Texas Rangers selected Kumar Rocker, the highly touted pitching prospect who famously did not sign with the New York Mets last season.

The Atlanta Braves have traded three players to the Kansas City Royals for the 35th pick in Sunday's Major League Baseball draft.

The draft choice, which is tradable because it is a competitive-balance pick given to small-market and low-revenue teams, comes with a slot value of $2,202,100. 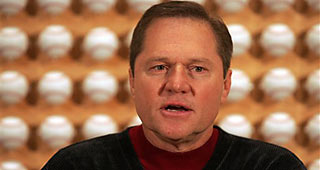 Rocker, the 10th overall pick in the 2021 draft, did not sign with the Mets after the team balked at the condition of his pitching arm. Now 22 and again draft-eligible, Rocker has steadily climbed teams' boards over the past month after regularly hitting 98 mph with his fastball in a dominant five-game stint with the Tri-City ValleyCats of the Frontier League.

"We have a very clear understanding, after a minor scope, of Kumar's medically documented health, which has allowed him to perform at the highest levels," said Scott Boras, Rocker's agent.

Angels Use All 20 Draft Picks On Pitchers

2021 Draft Order Will Be Set By Standings; Pirates Get No. 1 Pick

MLB Likely To Use 2020 Standings To Determine 2021 Draft Order

2021 MLB Draft Will Be Held During July's All-Star Events