Anderson Has Hall Supporter In Ripken 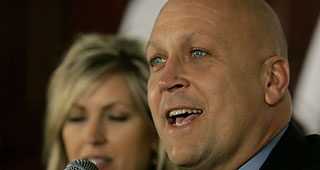 Perhaps it's fitting that Brady Anderson goes on the Hall of Fame ballot one year after one of his closest friends Cal Ripken Jr. achieved baseball's greatest honor. Anderson, a three-time All-Star, played with Ripken for more than a decade and made his biggest headlines by swatting a career-high 50 home runs in 1996. That's not really the type of player he was for the rest of his career, though. Anderson made his reputation as a fleet-flooted outfielder with a well-rounded offensive game. He stole more than 20 bases seven times but hit more than 20 home runs just three times in 15 seasons. Still, Anderson is about as recognizable as any non-Ripken Oriole from his era. Anderson was drafted and developed by the Red Sox, but he was traded to the Orioles after just 41 big league games. He never hit higher than .231 for his first three-plus seasons in Baltimore but finally began to assert himself in 1998. Anderson batted .271 with 21 homers and 53 stolen bases that year, earning the first of his All-Star assignments. "It happens to everybody. You age and you stop playing -- although he seems to have the fountain of youth, somehow," Ripken said recently of Anderson. "He came over in the Mike Boddicker trade and Boddicker's locker was next to mine, so he ended up coming into that locker. We struck up a friendship from that point." "I don't know how many votes he's going to get, [but] I'll vote for him." 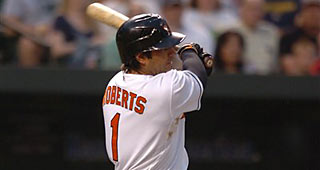 Orioles' officials are shooting down rumors of a Brian Roberts' trade in the near-term. Andy MacPhail says there is zero truth to speculation that the second baseman is about to be dealt. He says the likelihood of a trade before the New Year is remote. MacPhail isn't ruling out the possibility Roberts could be moved in the future, saying it's something that would take time. The 30-year-old admitted to one-time use of steroids a few days after being named in the Mitchell Report.

Sources inside the Mariners' organization still indicate they're alive on Johan Santana and Baltimore's Erik Bedard. There's a lot of disappointment in Seattle over losing the Hiroki Kuroda bidding with the Dodgers. He was clearly the best of the available free agent pitchers which forced the Mariners to sign former Twin Carlos Silva to a four-year, $48 million deal that is hard to figure. 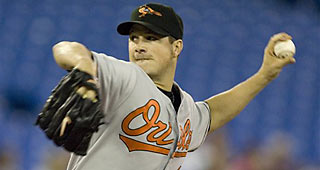 After listening to trade proposals concerning his ace for the past couple of months, Andy MacPhail says it is a "strong likelihood" that Erik Bedard will be the Orioles' Opening Day starter rather than being traded. "It's up to [manager] Dave Trembley in the final analysis to set his rotation, but that's what [Bedard] is today, and I think that's a strong likelihood," said MacPhail, the Orioles' President of Baseball Operations. "But that said, you never know." Bedard, a 28-year-old left-hander, is the Orioles' biggest trade chip and moving him for three to four young and major league-ready players would be one of the quickest ways to accelerate the team's rebuilding process.

Breaking his silence on the inclusion of his name in the Mitchell Report, Baltimore Orioles' second baseman Brian Roberts admitted that he used steroids once in 2003. In an interview in Tuesday's editions of The (Baltimore) Sun, Roberts acknowledged that he used steroids "once" in 2003. However, he said he hadn't used steroids or other performance-enhancing drugs since. In a statement he issued to The (Baltimore) Sun, Roberts said that after the single injection he immediately realized that it was not what he "stood for" or anything he wanted to continue doing. He said he's sorry he did it and said he regrets making what he says was a "terrible decision." Roberts was named in the Mitchell Report because former Orioles' teammate Larry Bigbie told investigators Roberts had told him he used steroids "once or twice" in 2003.

Ex-Met righty Kris Benson, who missed last season because of rotator cuff surgery, will throw for what his agent said was "10-12 teams" in Phoenix today. The Yankees are slated to be one of the teams. "A number of teams are very interested in seeing him," said Benson's rep. Gregg Clifton. The Orioles did not exercise a $7 million contract option on Benson after the season. Benson likely will throw 65 to 70 pitches.

The Orioles on Friday claimed righthander Greg Aquino off waivers from the Milwaukee Brewers. Aquino, 29, appeared in 15 games with the Brewers last season, posting an 0-1 record with a 4.50 ERA.

The Seattle Mariners, Cincinnati Reds and Los Angeles Dodgers are among the teams seeking Erik Bedard. As of last night, two team sources said no deals were imminent, but the five-player return for Tejada and the fact that the Astros are assuming the $26 million (over two years) on his contract puts the Orioles in good position. "There are some other things that we'd still like to do," Andy MacPhail said. "But I think you have to evaluate things on a case-by-case basis and see if it sets up to the standard over whether you are better off after you do [the trade] than before. We think we are better off after [today's deal] than we were before." 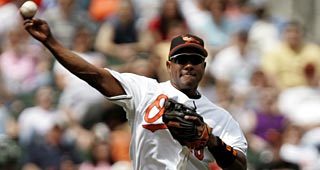 Former American League MVP Miguel Tejada was traded Wednesday from the Orioles to the Astros. Tejada's agent, Fernando Cuza, did not know the other players involved in the deal. The Sun in Baltimore reported on its Web site that the Orioles will receive outfielder Luke Scott, pitchers Matt Albers, Troy Patton and Dennis Sarfate, and third baseman Michael Costanzo. 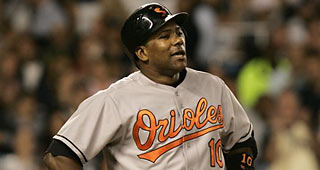 Former American League MVP Miguel Tejada was traded Wednesday from the Baltimore Orioles to the Houston Astros. Tejada's agent, Fernando Cuza, did not know the other players involved in the deal. The Sun in Baltimore reported on its Web site that the Orioles will receive outfielder Luke Scott, pitchers Matt Albers, Troy Patton and Dennis Sarfate, and third baseman Michael Costanzo.

Toronto Talking To Orioles About Bedard

The Mets and Dodgers are at the forefront of talks involving Orioles ace lefty Erik Bedard, but Baltimore president/GM Andy MacPhail is expected to take his time.

Giants And Angels Favorites To Get Tejada