Gary Sanchez Hopes To Return To Yankees By Playoffs 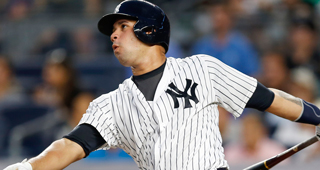 Gary Sanchez is hoping to return to the New York Yankees sooner rather than later.

Sanchez has been sidelined since September 12 with a strained left groin.

"Right now with everything I've done, I feel better," the catcher said. "Hopefully in the next few days, with all I have to do, and after working with the trainers, I can feel the way I feel now."

He missed 16 games earlier this season also due to a strained left groin.