Albert Pujols On Retirement Plans: 'I'm Not Chasing Anything' 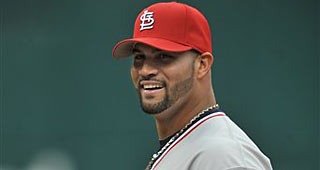 Albert Pujols won't waver on his decision to retire after the 2022 season.

The 42-year-old is confident in his decision despite a second-half power surge that has him at 698 home runs with the regular season winding down.

"I think [Yadier Molina] and myself could play a couple of more years if we decided to do that, but at the end of the day, you have to go with your heart," Pujols said.

"For myself, I said it in Spring Training and said it early because I knew something like this was going to happen. I knew if I had a good year, or a lot of success, people thought I would change my mind. But when I say something, I will do it. So, I'm going to retire after the World Series, enjoy my life, my career and my family."

On the subject of home runs, Pujols scoffed at the notion that he is "chasing" 700 home runs.

"I'm not chasing anything," he said adamantly. "That's something [the media] is playing with. I've never chased any numbers and 22 years later I'm definitely not going to chase anything. In my career, I've been so blessed with everything that I've accomplished in my life.

"What I'm chasing right now is another ring," Pujols continued. "That's what I'm chasing for the city of St. Louis and for our fans and that's why I signed back this year. Going back to St. Louis, I knew we were going to have a great ballclub and hopefully get the chance [to win a championship] and hopefully finish this chapter that I started 21 years ago."