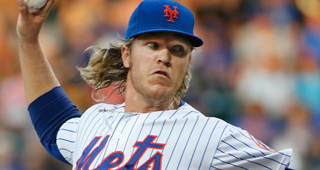 Noah Syndergaard sees his one-year, $21 million deal with the Los Angeles Angels as a chance to reestablish himself as an elite starting pitcher.

"I think if I get back to my old self, then the combination one-two punch with myself and Shohei, and all the young talent that the Angels have, I think we can really make a run at this thing," Syndergaard said.

Syndergaard received the qualifying offer from the New York Mets, but little else. He had spent his entire Major League career with the club, but felt the organization was preoccupied with replacing its front office while his future was up in the air.

"I didn't really hear from them all that much in the last two months from the end of the season until now," he said. "I understand they had a lot on their plates."

Syndergaard still said leaving New York was "the hardest decision of my life. But I definitely think that I made the right decision."