Jonathan Lucroy Changed Signs With Every Pitch Against Astros 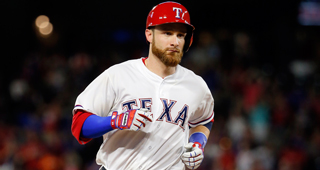 Jonathan Lucroy, who spent parts of four seasons in the American League West from 2016 to 2019, had a front row seat to the sign stealing of the Houston Astros.

Lucroy, who recently signed with the Boston Red Sox, played for the Oakland Athletics, Texas Rangers and Los Angeles Angels -- all division rivals of the Astros.

"I knew about that two years ago, that it was going on," Lucroy said. "I know it just recently came out. Everyone in baseball [knew], especially in that division that played against them. But we were all aware of the Astros doing those things and it was up to us to outsmart them, I guess you could say.

"It's kind of hard when you have a computer program that breaks your signs. We actively changed signs. Every single pitch, we were changing signs. You had to because they would relay them to second, stealing them from first, too -- from between your legs. They had a very intricate system going on. We were well aware of it, and it was a challenge. It was a mental challenge to really overcome that. It's easier said than done. But it's a shame, and I'm glad it came out and it came to light."

Lucroy said that Mike Fiers informed him of Houston's tactics once they became teammates in Oakland in 2018.