Phillies To Retire No. 34 In Honor Of Roy Halladay 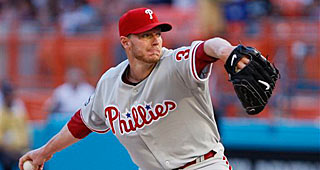 The Philadelphia Phillies will retire No. 34 in honor of Roy Halladay on the 10th anniversary of his perfect game.

The ceremony will take place on May 29 before a game against the Washington Nationals.

A 6-foot-high No. 34 statue outside Citizens Bank Park will be unveiled.

Halladay was 40 when he was killed while piloting his plane, which crashed into the Gulf of Mexico off the coast of Florida in November 2017.