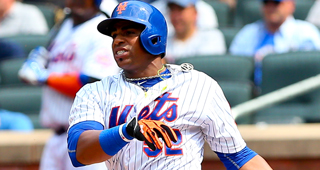 The New York Mets have reached an agreement with Yoenis Cespedes to restructure his contract and create some payroll space.

According to a report, the agreement will ""significantly lower" his salary from $29.5 million.

The deal comes in the wake of a grievance the Mets had as it pertains to how Cespedes injured himself on his ranch in May.

Before the adjustment, the Mets were projected to have a $188 million payroll.