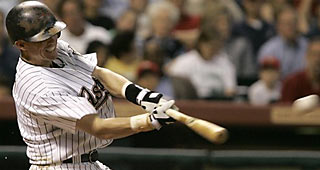 Cavan Biggio hit for the cycle on Tuesday night, entering his family into Major League history.

Biggio homered in the third inning, singled in the sixth, doubled in the eighth and tripled in the ninth for the Toronto Blue Jays.

"I did know my dad had one," Cavan Biggio said. "I have a ticket to the game he got it in in my room my whole life. I didn't think I was going to get up there for the opportunity."

Craig Biggio hit for the cycle at Colorado's Coors Field on April 8, 2002.

The only other father-son duo in major league history to hit for the cycle was Gary Ward for Minnesota at Milwaukee on Sept. 19, 1980, and Daryle Ward for Pittsburgh at St. Louis on May 26, 2004.