Alex Rodriguez Has Valuables Taken From Car In San Francisco 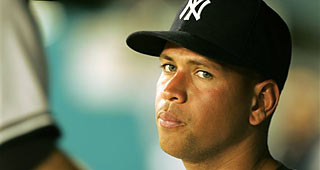 Alex Rodriguez was among a group of people who had valuables stolen from an SUV Sunday night in San Francisco.

The vehicle, which was rented by ESPN for some of the crew covering the Philadelphia Phillies-San Francisco Giants game on Sunday Night Baseball, was broken into while the group was having dinner after the game.

Rodriguez declined to comment on what was stolen, but the San Francisco Chronicle reported more than $500,000 worth of jewelry and other items was taken.

"I am saddened that several items that were of a personal nature and irreplaceable with sentimental value were taken," Rodriguez said. "I am encouraged that local law enforcement has security footage of the crime and are doing all they can to get the items back."