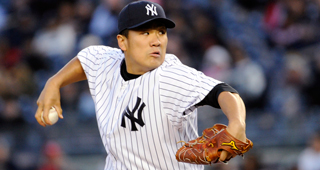 Tanaka's velocity, which was a concern in early April, topped out at 93 mph against the Detroit Tigers on Thursday. His decision to throw fewer four-seam fastballs and a partially torn ulnar collateral ligament have been to blame for his struggles.

Since allowing seven earned runs (nine overall) in his first two starts (nine innings), Tanaka has allowed just one run over his last two appearances, which have spanned 13.1 innings. He also has 14 strikeouts and just two walks over those 13-plus innings.