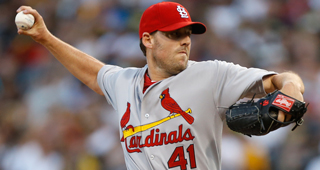 The St. Louis Cardinals have exercised their 2015 option on John Lackey, which is for the Major League minimum.

Lackey, 36, agreed to a five-year, $82.5 million contract with Boston in December 2009 that contained a provision for a conditional team option at the minimum if he missed a season due to specified injury.

He did not pitch in 2012 after reconstructive elbow surgery.

The minimum next year will be $500,000 plus a cost-of-living adjustment.