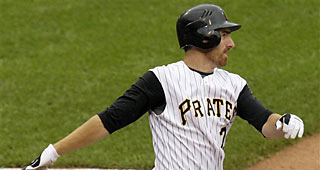 With free agency approaching, Adam LaRoche is aware that the Washington Nationals may be unlikely to re-sign him.

"If you had to ask me now, I would assume that I would have to move on, unfortunately," he said.

"LaRoche understands the situation the Nationals will face this winter," writes Mark Zuckerman. "Ryan Zimmerman needs a place to play. His days as a regular third baseman in the big leagues likely will end after this fall. There’s no room in the outfield for him, not with Bryce Harper and Jayson Werth in the corners and Denard Span’s $9 million option a no-brainer to pick up.

"Zimmerman, still owed a minimum of $76 million over the next five seasons, pretty much has to become the Nationals’ first baseman. Which likely leaves LaRoche — whose current contract includes a $15 million mutual option for 2015 — chair-less when the music stops."