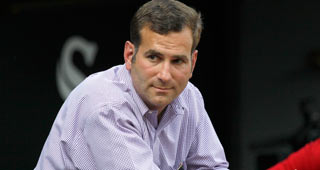 Carlos Rodon, the third overall pick in this June's First-Year Player Draft, has been promoted to Triple-A Charlotte by the Chicago White Sox.

Rodon has moved quickly through the Minor Leagues.

He pitched 9 2/3 innings with Class A+ Winston-Salem, striking out 15 batters while walking five.

The promotion to Charlotte means he's skipping Double-A, which in turn likely means the White Sox think he's close to being ready for the Majors.