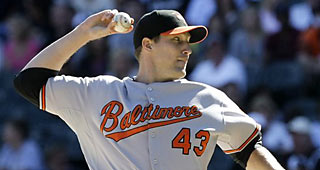 The Detroit Tigers have purchased the contract of Jim Johnson from Triple-A Toledo.

Brad Ausmus avoided questions about Johnson before the game, but made the announcement of his promotion at the end of his postgame news conference.

Johnson, 31, made four appearances for Toledo, since signing with Detroit, and allowed two earned runs in 4 2/3 innings.