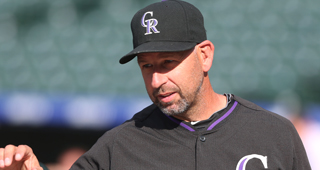 Saturday night's game between the Cincinnati Reds and Colorado Rockies was postponed because of a water main break just steps from the primary entrance to the ballpark.

The Rockies originally said the game would be delayed 30 minutes.

Restrooms inside Coors Field were not working and there were only limited concessions as the water was turned off to the stadium.

About 45 minutes after the scheduled first pitch, the Denver Office of Emergency Management requested the game be postponed.