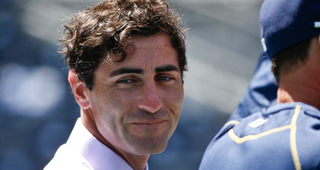 Frazier, 29, who leads baseball in hits this year, is not a free agent until after the 2022 season.

In exchange, the Pirates are acquiring right-hander Michell Miliano, shortstop Tucupita Marcano and outfielder Jake Suwinski, according to a source.

The Mets acquired McKinney from the Milwaukee Brewers on May 25. He hit .220 with six doubles, a triple, five home runs and 14 RBI. He was designated for assignment on July 16.

The Milwaukee Brewers have acquired left-hander Kyle Lobstein from the Washington Nationals in exchange for cash considerations.

Lobstein has been optioned to Triple-A Nashville.

To create space on the 40-man roster, right-hander Ryan Weber was designated for assignment.

The Milwaukee Brewers have acquired Rowdy Tellez from the Toronto Blue Jays in exchange for right-handers Trevor Richards and Bowden Francis.

The first baseman was expected to be in uniform for Wednesday's series finale against the New York Mets.

The Toronto Blue Jays have acquired Adam Cimber and Corey Dickerson in a trade with the Miami Marlins.

Cimber is controllable via arbitration through the 2024 season.

The Tampa Bay Rays have acquired Mike Ford from the New York Yankees in exchange for $100,000 and a player to be named later.

Ford was designated for assignment Saturday.

McKinney, 26, is a former first-round pick. The Mets have struggled with injuries as of late.

The New York Mets have acquired Cameron Maybin in a trade with the Chicago Cubs.

Maybin has been assigned to Triple-A Syracuse. The Cubs received cash considerations.

The Mets were motivated to add outfield depth due to recent injuries.

The San Francisco Giants have acquired Mike Tauchman from the New York Yankees for reliever Wandy Peralta and a player to be named later.

With Clint Frazier and Brett Gardner splitting time in left field, there was little opportunity for Tauchman to find a spot in the Yankees' lineup.

Yankees Nearing Trade With Padres For OF Greg Allen