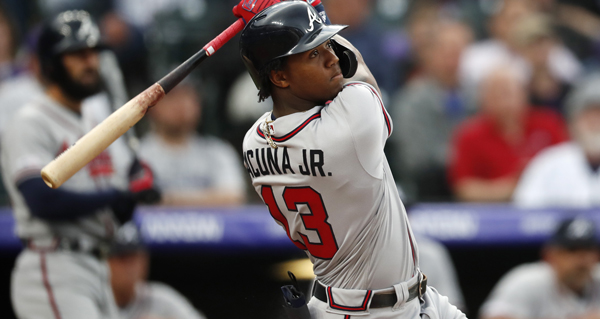 The top five fantasy baseball players, at any position, are outfielders. The tier 1 group will be gone by the first half of the round 1. Juan Soto leads tier 2, and this quartet should fly off the board in rounds 2 and 3. Aaron Judge formerly resided in this tier as well, but his broken ribs have thrown his value into question.

Tiers 3 and 4 provide a bit of everything – safe and steady (Charlie Blackmon and George Springer), light tower power with injury concerns (Giancarlo Stanton, the aforementioned Aaron Judge and Joey Gallo) and a pair of young White Sox phenoms who may explode (Eloy Jimenez and Luis Robert). These tiers will start to go towards the back end of round 3 and continue through round 7 or so.

You can build out your OF3 and utility spots through the tier 5 and 6 folks. Consider upside plays such as Franmil Reyes and Oscar Mercado in tier 5, along with Christian Pache and Bryan Reynolds in tier 6. Andrew McCutchen and Joc Pederson could provide great ROI as post-hype veterans.

Since you need at least three starting outfielders, and since the same applies for every other team in your league, you should be aggressive with targeting the top outfielders early, as they will go off the board fast. If you have a top five overall pick, go with an outfielder. Ideally you’ll want at least one outfielder from tiers 1-2, and at least two from the tier 1 – 3 group. As you get to tier 4 and onward, make sure to target some of the upside plays mentioned above.