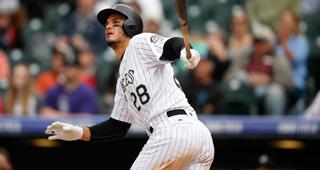 The hot corner rolls with serious lumber, with Rockies stalwart Nolan Arenado leading the charge. Alex Bregman should sit near the top of OBP, aided by all the beanballs coming his way. Anthony Rendon switches leagues for 2020, but expect his same .300 AVG, .400 OBP and 30+ jacks. The tier 1 group should all be taken in round 2 of drafts.

Tier 2 comes with similar ceilings as the tier 1 group, but also with bit more risk, as Rafael Devers only has one super season, while Jose Ramirez struggled for most of last year and Kris Bryant has yet to return to the heights of his 2016 peak. The tier 2 trio should go off the board in rounds 3-4.

Similar to its predecessor tiers, the tier 3 group also carries a very high ceiling (tier 1 numbers), but with even greater risk. Yoan Moncada has all world talent, and very likely will take a step up this year. Vladdy Jr. presents the highest risk / reward play – his 2019 season unfairly left much to be desired, but that’s what comes with being tabbed as a generational hitting prospect. 2020 could be his year to go bonkers…or it may just be another year of smaller ascension. It wasn’t long ago that Manny Machado resided in tier 1. His ballpark does him no favors though, and we’ve likely seen the pinnacle of his offensive numbers. But he’s still a fine starting fantasy 3B, who’s likely to be more comfortable in year 2 with the Padres.

You should have no problem snagging a third baseman from tiers 1 – 3 as your starter, given how deep the position runs. If you invest in a tier 3 player, that’ll give you a chance to load up on other positions. The depth at third base is ridiculous – similar to shortstop today and what first base used to be back in the day. You should consider grabbing multiple guys from tiers 1 – 3, especially if position versatility is involved (among these guys, Bregman and Machado can play 3B and SS, and Bryant is eligible at 3B and OF).