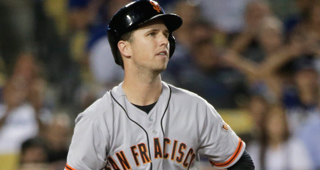 * Note: Players in bold are my picks from tier 3 and later to outperform their ADPs.

Buster Posey yet again finds himself atop the rankings in tier 1, but unlike last season, he has company. Cubs phenom catcher Kyle Schwarber took the league by storm during the second half of 2015, posting numbers that helped many fantasy teams win their league title. Note that while both sit on the same tier, Schwarber comes with more risk, as we have much less of a performance sample from him. Schwarber had a high strikeout percentage, which could keep his numbers down as pitchers adjust to him. But he possesses incredible upside, so the young Cubs’ catcher grabs a spot in the top tier.

After the top two catcher options, the rest of the group provides little real separation. Would anyone be surprised if Yasmani Grandal had a season matching the crew in tier 2?

As for my value picks, I like Travis d’Arnaud, Devin Mesoraco and J.T. Realmuto. Highly touted for years, injuries have marred d’Arnaud’s early career. If he can stay healthy, he’ll put up tier 2 numbers. Speaking of injuries, Mesoraco was knocked out of the 2015 season after only 51 at-bats. What happened in 2014? Well, 25 home runs with 80 RBI and an .893 OPS happened. Dude can hit if healthy. As for Realmuto, he showed a high contact rate and ability to hit for extra bases (including HRs) during September of last season. For a late round flyer, he’s a solid candidate.

The best strategy for the catching position this season is to wait, wait and wait some more, and fill the spot towards the back end of your draft. From there, don’t be afraid to pick up the hot hand off the waiver wire during the season and repeat again with the next guy. With so little separating the catchers, you can wait and get a player that will produce similar value to those take in tier 2. As for Posey and Schwarber, I’d be inclined to let others draft them in your league unless they drop much further than expected. You can do just fine by going with the less expensive options.