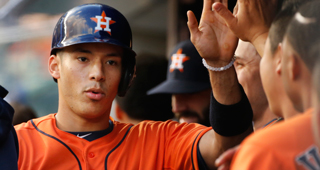 Speaking of new coronations, we have a new leader of the shortstop empire – all hail Carlos Correa. Just 21 years old, Correa will dominate the shortstop position for years to come.

Tier 2 presents strong options as well, with Tulo followed by three additional young studs, all ready to make their mark on the league.

Once you land in tier 3, you face more uncertainty, whether it be health and/or performance related. Will Ian Desmond bounce back this season? He could post tier 2 numbers, or just as easily, stats attributable to a player in tier 4. Speaking of tier 4, and tier 5 for that matter, you have some intriguing late round options that can emerge. Note that Jose Reyes tumbles all the way down to tier 5 due to a likely lengthy suspension forthcoming for domestic abuse.

As for my bold predictions for shortstop, I’m dipping into late round territory her. First off, new Rays acquisition Brad Miller gets a mention here for one specific reason – he can really hit. How well he can play shortstop is another question, but for fantasy purposes, he’ll maintain SS eligibility for the whole year. A season with 15 home runs, 10 stolen bases and a .270 average can be achieved.

Switching over from a former Seattle Mariner to a current one, Ketel Marte impressed upon his call up to the big leagues last season. Hitting in the leadoff role for much of his time, Marte found his way on base with a .283 AVG and .351 OBP, while stealing eight bases in 57 games played. Extrapolate those numbers during a full season and you get a nice ROI on a late round pick. Will he keep those numbers up? We’ll see. But for minimal cost, it’s worth a shot.

So what’s the best plan of attack for the shortstop position in your draft? I suggest either drafting one of the studs in tiers 1 or 2, or otherwise waiting to select a shortstop once most teams have made their picks. There are enough red flags with the tier 3 crew that it makes sense to wait if the tier 1 and 2 guys are off the board. Nothing wrong with grabbing a tier 3 player either – just don’t do so with a high draft pick.