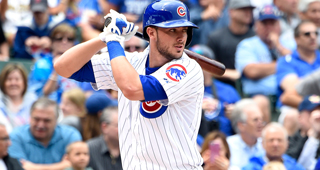 Third base comes with plenty of high-end options, buoyed by an impressive young crop of stars. The tier 1 group will provide your team a solid anchor to build around, each of whom should be off the board by early round 2. Tier 2 presents good alternatives if you miss out on the tier 1 crew, as does tier 3. I have injury concerns with Adrian Beltre, so he fell to tier 3 on my board. Tier 3 splits between old guard and two up and comers. See the second base writeup for my thoughts regarding Anthony Rendon. I’ll address Maikel Franco and the lead tier 4 option, Mike Moustakas, below. Speaking of tier 4, you’ll find solid value there, including talented but enigmatic Brett Lawrie, who now returns to a favorable hitting environment.

Maikel Franco had ups and downs as a MLB rookie last season, as most do, but he ended with a solid line of .280/14 HR/50 RBI until suffering a season ending injury. Franco also boasted a solid K rate of 15.5% (yes, in today’s game this is good) and a walk rate of 8%. So he has a good plan at the plate, and look for him to continue to ascend in 2016. As for Moustakas, he finally had a long awaited breakout in 2015. The key difference was that he finally figured out how to use the whole field, as opposed to pulling every pitch. As lower tier option, look for the Royals’ third baseman to provide a nice ROI.

The good news is that third base contains strong depth, so you should end up with a solid player at the position. That being said, don’t hesitate to grab a tier 1 stud if the opportunity presents itself. The delta between the tier 1 and tier 2 groups is enough where it’ll be worth your while. If you’re unable to grab someone from tier 1 though, no need to fret – solid starting options remain through tier 3, with additional depth in the lower tiers.