Twins To Retain Derek Falvey As President Of Baseball Operations 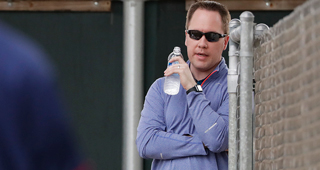 The Minnesota Twins have announced that Derek Falvey will return as President of Baseball Operations next season.

"We think we have a very dynamic, smart, forward-thinking leader, and he'll be back in 2023, and I'm hoping many, many years after that," team president Dave St. Peter said.

The Twins have a 52% winning percentage since Falvey took over as the head of baseball operations after the 2016 season.