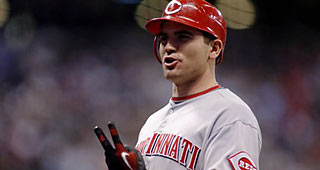 Cincinnati Reds first baseman Joey Votto announced after his team's 1-0 win over the Philadelphia Phillies on Wednesday that he will have season-ending surgery Friday to repair a torn left rotator cuff.

Votto told reporters his injury has "been lingering" for a while" and that he has had a "difficult time" this season.