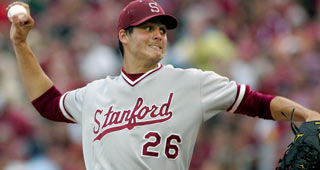 Mark Appel, the No. 1 overall pick in 2013, made his Major League debut on Wednesday night just a month shy of his 31st birthday.

He pitched a scoreless ninth inning for the Philadelphia Phillies in a 4-1 loss to the Atlanta Braves. Appel allowed one hit and recorded one strikeout.

"It's pretty surreal," he said.

The right-hander was taken first overall by the Houston Astros and then traded to the Phillies in 2015.

Due to injuries and ineffectiveness, Appel left baseball in 2018 before coming back to the Phillies organization in 2021.