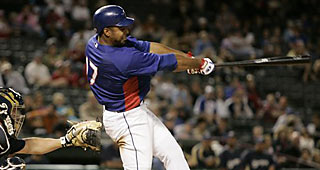 Nelson Cruz homered twice on Tuesday night to become the oldest player in Major League history to have a 30-homer season.

Cruz hit a two-run homer in the third inning and a solo drive in the fifth for the Tampa Bay Rays, giving him 447 in his career and his eighth 30-homer season.

"That's definitely a privilege. David Ortiz means so much to baseball, also he's Dominican," said Cruz, another star from the Dominican Republic. "So, it's an honor to be by his side."