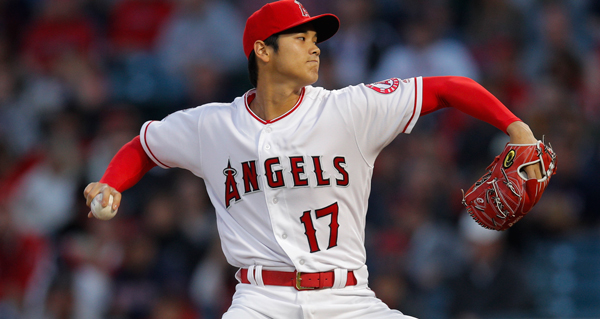 Shohei Ohtani made Major League history when he took the mound for the Los Angeles Angels on Monday night.

He became the first player in nearly 100 years to start a game while also entering the day leading baseball in home runs.

Ohtani struck out nine over five innings and went 2-for-3 at the plate with two RBI and three runs scored. He picked up his first win since May 20, 2018 in the Angels' 9-4 win over the Texas Rangers.

"That was a pretty complete game of baseball," Joe Maddon said. "I had to put the hold sign on him. He wanted to steal, too. The first inning was a bit rugged, finding his command and [Nate] Lowe grabbed one off him. Otherwise, he would’ve given up zero or one at the most. He kept getting better, that’s what he does. On offense, he did everything, including bunting for a hit. If you weren’t entertained watching him tonight, you can’t be entertained by the game of baseball."

Ohtani entered his start as a pitcher as the MLB co-leader in home runs as a hitter with seven. The last player to do so was Babe Ruth, who was the starting pitcher for the New York Yankees on June 13, 1921 while also leading baseball with 19 home runs.