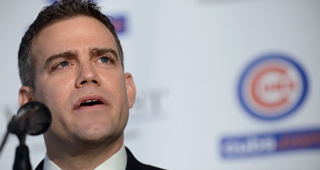 Theo Epstein stepped down as President of Baseball Operations for the Chicago Cubs on Tuesday with one year left on his contract.

The 46-year-old's name was immediately linked to the likes of the New York Mets and Philadelphia Phillies, but he insisted he has no plans to pursue a job with any club in 2021.

"I come from the school of never ruling anything out," Epstein said. "But having some firm ideas in my mind of what I think is best for me and best for my family, I do hope and expect to have a third chapter in baseball, but in no shape or form do I expect to do it right away."

Epstein said he wasn't burned out by the job in Chicago, but felt it was the right time to leave just as it was with the Boston Red Sox nearly a decade ago.

"I'm somewhat self-aware -- not in a lot of areas, but in some areas, I am. I’m self-aware enough in this area to know that, after a while, I need a new challenge," he said.