CC Sabathia: Yankees Were 'Cheated' Out Of Title In 2017 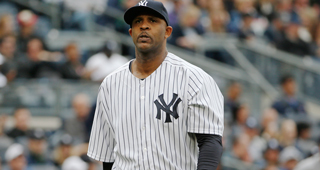 The Houston Astros outlasted the New York Yankees in a thrilling American League Championship Series in 2017.

In that series the Yankees went 0-4 at Minute Maid Park, where the Astros were found to have used a monitor displaying the center-field camera feed throughout that season.

CC Sabathia started Game 7 of that series for the Yankees.

"It's weird, like it changes all the time," Sabathia said during an appearance on Showtime's "Inside the NFL" on Tuesday night. "When I first heard it, I was upset, and then as investigations went on ... I was like, well, we can't go back and play the games. ... But as more information started to come out, I'm like, we played a seven-game series in 2017, ALCS, and we lost really on kind of like one pitch.

"As everything's been coming out and the more facts that we get, it's getting frustrating, man, to sit here and know that late in my career I could've had a title, maybe '17 or maybe '18. But we got cheated out of a team kind of doing something that's not within the rules of the game."