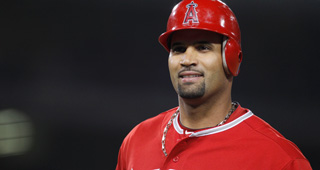 Albert Pujols hit a solo home run on Thursday night to reach 2,000 RBI for his career.

He is just the third player in Major League history to drive in 2,000 or more runs, joining Alex Rodriguez and Hank Aaron.

Pujols received an ovation from the sparse crowd at Comerica Park in Detroit, where his accomplishment was recognized on the videoboards and by the public address announcer.

"He's one of the greatest hitters ever to walk the planet, without question," Brad Ausmus said recently. "For about 10 years, he was the best. He was the Mike Trout of his time. Really, it went from Pujols to [Miguel] Cabrera to Trout, but Albert's body of work is clearly the best."

The fan who caught Pujols' home run ball said he wasn't opposed to giving it back to Pujols, but he decided to keep it.