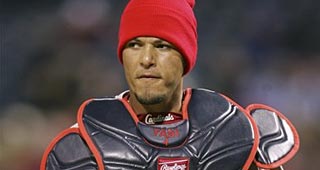 The Chicago Cubs and St. Louis Cardinals won't see each other until early May, but the heat already has been turned up on one of baseball's best rivalries.

Cubs third baseman Kris Bryant called St. Louis "boring" during a comedic moment at the team's annual fan convention this weekend. When Cardinals star catcher Yadier Molina heard about the comment, he responded by saying "only stupid players and losers" make fun of other cities.