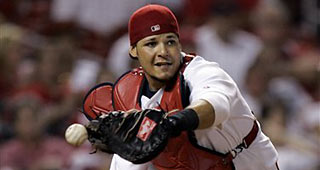 Cardinals catcher Yadier Molina will undergo a minor clean-up surgery on his knee next week, according to reports first brought to light by Primera Hora, which cited Molina's agent Melvin Roman.

The reports did not specify which knee will be operated on, but Cardinals president of baseball operations John Mozeliak confirmed to St. Louis Baseball Weekly that Molina will undergo a "very small procedure" that shouldn't sideline the nine-time All-Star for anything more than a few days. The team fully expects Molina to be ready by Spring Training.