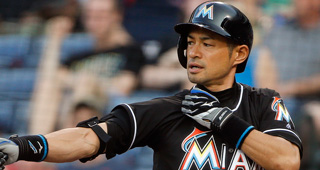 Ichiro Suzuki, 43, has become the oldest player to start a game in center field in the modern era.

He was in the lineup for the Miami Marlins and batting leadoff against the Chicago Cubs on Sunday for the first time this season.

Suzuki broke the record held by Rickey Henderson, who was a month younger when he started in center in 2002 for the Boston Red Sox.

He has played in 63 games this season, mostly as a pinch hitter.