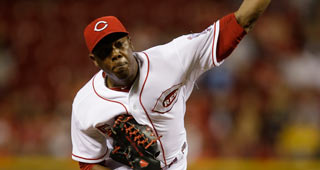 Aroldis Chapman will receive a suspension in the coming days, according to Jon Heyman.

The report didn't include the length of the ban, but the left-hander "will get a ban."

Chapman allegedly choked his girlfriend and discharged a handgun eight times in his garage during an offseason incident. Criminal charges weren't filed, but the expectation has been that Major League Baseball will suspend the New York Yankees closer.