Ethier To Dodgers: Start Me In Outfield 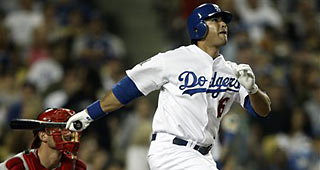 Andre Ethier isn't demanding a trade, but he wants the Los Angeles Dodgers to start him in the outfield.

Ethier told the Los Angeles Times that he had his agent tell the Dodgers that he didn't want to return to the same situation he endured last season.

Ethier also clarified that he wasn't making a play-me-or-trade-me ultimatum to the Dodgers.

"I'm not there saying that yet because there's still a lot of things to hash out and get going with this team," Ethier told the LA Times. "It's one where I said through my agent, I want to play every day, and that's what I'm expecting to do this year. It's their decision to make from there what they want to do with that."