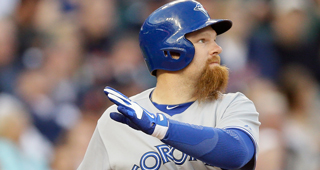 After a very productive season, the Toronto Blue Jays have received calls about Adam Lind.

Lind had the highest batting average among left-handed hitters in the Major Leagues this year.

"I hear the Blue Jays are getting a lot of interest on Lind and not just from American League teams. I've heard three or four clubs," one executive said.

Lind also has a team-friendly contract. He earned $7 million this season and the Blue Jays are expected to pick up his option of $7.5 million for 2015.