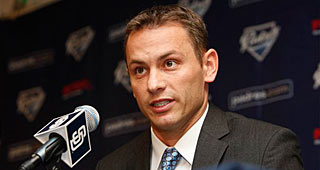 Cubs GM Jed Hoyer said there will be consequences for Ian Stewart's critical tweets of the organization that included the third baseman claiming the team "might as well release" him.

"It doesn't exactly help the organization get better to spend the morning dealing with it," Hoyer said on WSCR 670-AM. "It's a sensitive subject. I won't really expand on but I can tell you it was really unprofessional and there's going to be consequences."