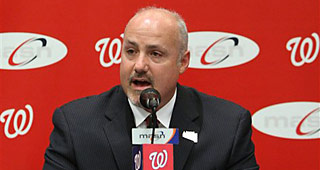 With almost two weeks of June baseball remaining, the Nationals and Royals did something we don't usually see quite this early in the season: they made an actual trade of import. While we've seen more early trades this year than normal, this was the biggest one to date, as Kansas City sent their closer Kelvin Herrera to Washington in exchange for a trio of prospects.

Herrera was basically a certainty to move at some point before July 31st, given that the 22-50 Royals are 16.5 games back in their division and Herrera will be a free agent after the season. It's not surprising that the Nationals would want to make a move. Not when you consider their preseason expectations against the fact that they are now, in actuality, 3.5 games behind the Braves with a 38-32 record that puts them in a second-place tie with the Braves. What is surprising, though, is that they were actually able to make one happen at this point on the calendar.

When we last checked in on the Nats back in April, they were having some issues with the bullpen and that hasn't changed. Closer Sean Doolittle has been excellent (1.47 ERA, 1.62 FIP, 12.62 K/9, 0.88 BB/9, 0.59 HR/9), and Justin Miller has more than exceeding expectations in his 12 innings of work (1.42 ERA, 0.64 FIP, 15.63 K/9, 0.00 BB/9, 0.71 HR/9). But, after that, things get a little iffy. Both Ryan Madson and Brandon Kintzler have ERAs over 4. Herrera gives them a solid setup man, along with the ability to shift things around should the need arise. If it doesn't, and Madson and Kintzler improve, he also lightens everyone's load. It's not hard to see why the Nationals would want to make the deal as soon as possible, assuming the price was right.

As for the prospects that went back to Kansas City, the package consists of outfielder Blake Perkins, third baseman Kelvin Gutierrez and RHP Yohanse Morel. The latter is a 17-year old hard-thrower and most definitely a lottery ticket, while the position player prospects are the pieces of higher import. Both rank somewhere around the ten-spot in Washington's farm system. It's not that they aren't potentially valuable players, but it's hard to believe that Royals GM Dayton Moore couldn't have done a little better on the deal had he waited.

The Royals weren't going to get an overall top-ten prospect out of Herrera, considering that he's a pure rental and he's not quite at 2016 Aroldis Chapman's level. But it is certainly odd that they didn't wait and see what happens with the trade market prior to the deadline and see if there was more need among contending teams.

Basically, the Royals just worked to define the market for top-notch relievers at the deadline before a market even developed. They set the value fairly low, and it wouldn't be surprising if they actually did other non-contending teams a favor by taking one of the more valuable pieces off the table so early in the season.

Grade for Nationals: A

The Nationals had the desire to improve the bullpen and they did so. They paid what seems to be an extremely fair cost for said upgrade and they now have him quite a bit earlier than normal. That means Herrera will be around for more innings and provide more value to his team in their attempt to make it back to the postseason in a surprisingly challenging season. If I'm Washington GM Mike Rizzo, I do this deal every time.

For all the stated reasons, it's not entirely clear why the Royals would move Herrera so far in advance of the trade deadline. Unless they know something about Herrera that we don't, there was little reason for them to make this deal before letting the market for relievers develop. While the package wasn't devoid of value, it seems that the Royals probably should have waited things out a bit and it's hard to be particularly high on Moore's decision to move Herrera this early in the season for a less than overwhelming return.