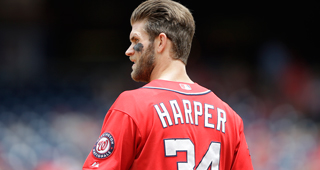 The season is early yet, but it's not so early we can't start to freak out just a little a bit. While logic would dictate we haven't reached "safe" sample size sets yet, Mike Trout has assumed the lead in WAR (by both bWAR and fWAR) which, per tradition, means it's time to start ascribing meaning to the numbers.

On the other hand, Christian Villanueva is hitting .355/.444/.774 for a 236 wRC+ and has already put up 1.4 bWAR/fWAR. If he manages to keep up a pace anywhere in this neighborhood, we'll be back to discuss his eventual Rookie of the Year award before too long. In the meantime, though, we'll skip the individual performances for now and take a look at the bigger picture.

Turning to the standings, they almost certainly aren't what you expected heading into the season. There will always be some surprises, but almost every division has some serious early-season upsets going on. The National League standings are off to a particularly jarring start, with not one of the teams that almost everyone predicted as a division winner currently in the lead. While there's plenty of season left, there's enough behind us to wonder if there isn't cause for concern amongst the preseason favorites.

The Mets are currently on pace to win 113 games, while the Nationals are sitting 5.5 games back in fourth place, behind both the Phillies and Braves. Per Fangraphs projections, Washington started off the season with a 77.8% chance to win the division, but, as of today, that number has slipped to 56.0%. They started with an 89.3% chance to make the playoffs, but that number has now dipped to 73.0%. Those are huge drops in a relatively short period of time, and there are a couple of causes for them.

Washington's offensive depth chart is an extremely hot mess right now, with expected primary contributors Daniel Murphy, Anthony Rendon and Adam Eaton all currently on the shelf. We can expect things to improve on that side of the ball as those players slot back into the lineup and push hitters like Moises Sierra (38 wRC+) and Wilmer Difo (62 wRC+) out of it.

The lineup hasn't been the only problem, though. Just like last year, we're going to have to talk about Washington's bullpen in the early goings. The bullpen collectively has the worst ERA (5.66) in the NL. While their FIP (4.46) offers over a whole digit of improvement, it still ranks next-to-last in the league. If we turn to win probability stats (which can be more useful for relievers), things are just as bleak, as Nationals relievers are next-to-last in the NL by both WPA (-0.63) and RE24 (-8.16).

Like the lineup, the bullpen depth chart is littered with injured players, with Shawn Kelley, Joaquin Benoit and Matt Grace, among others, and the return of some of them will at least help to lighten the burden on the current relievers. But those players don't exactly inspire a huge amount of confidence, even if they're healthy, and we might be revisiting this issue later in the season with more of a sense of concern. It's still early, after all.

The Nationals still look like they'll make the postseason this year. It's extremely unlikely that the Mets will keep this up over a whole season and the same goes for the Phillies (14-7) and the Braves (12-9). But the Nationals bullpen was middling in 2017 and the early returns aren't great in 2018. Even if things shake out as expected and they do make it into October, their failure to do much over the offseason could come back to bite them yet again.

The Cubs are in a seemingly similar situation to the Nationals, both in terms of preseason expectations and the actual standings today. Like Washington, Chicago was the favorite, but now they also sit in 4th place, in front of only the Reds, who have the worst record in MLB and have already fired manager Bryan Price. Unlike the Nationals, however, the Cubs sit only 2.0 games back from the division-leading Cardinals.

As with the Nationals, the Cubs are still a statistically safe bet to both make the playoffs (89.0%) and win their division (65.1%), but when you consider that the latter number has dropped from 81.4% to start the season, you can see why we might start to worry. While the Nationals have endured depth issues in their lineup and bullpen, the Cubs have a whole other problem on their hands.

The other new addition, Yu Darvish, is also experiencing a new-found penchant for walking hitters, as his 5.03 BB/9 is well above his 3.36 career stat. In his four starts, with 19.2 IP, he's racked up a 6.86 ERA and a 5.01 FIP. While Chicago has managed to win two of his starts, little of the credit goes to Darvish, as he's failed to make it past the fifth inning so far, and has been absolutely abysmal in high leverage situations, with opposing hitters torching him for a .750/.750/1.250 slashline.

It's still only April and, as with the Nationals, we don't want to overreact just yet and declare the Cubs' rotation dead in the water. But it's certainly troubling that 80% of Chicago's rotation is struggling this much. If it was just one pitcher needing to turn it around, that would be one thing, but it's four pitchers, and that could certainly make things more interesting than we expected moving forward in the NL Central.

Despite the Mets' aforementioned hot start, they aren't even in possession of the best record in the National League. That honor falls to the Diamondbacks, who are currently 15-6 and on pace for a 116-win season. As with the Mets, they're not going to stay on that pace for the whole season, but it has currently pushed yet another division favorite down in the standings. The Dodgers have won six of their last seven to rebound from a 4-9 start to the season and sit in second place at a game over .500, but that doesn't mean they can put all their troubles behind them.

Their biggest concern has to be Kenley Jansen's season so far. Jansen, who has been one of the best relievers in baseball for years, is currently in possession of a 6.23 ERA and a 6.75 FIP. He's still striking out a whole bunch of hitters (10.38 K/9), but that's nothing compared to the 14.36 K/9 he recorded last season, and his walk rate (4.15 BB/9) and home run rate (3.12 HR/9) have both skyrocketed. The velocity on his slider is down a couple of miles an hour, but the same was true during his ridiculous start last year, when he didn't walk a batter until June 25. His cutter velocity was seriously down in spring training, but has ramped up since.

The buck doesn't stop with Jansen, either, as Los Angeles has been hurting on the offensive side of the ball, as well. A quick quiz: Here are the four best wRC+'s for the Dodgers: 177, 150, 134 and 134. Who do they belong to? Probably some combination of last year's best hitters right? Corey Seager? Cody Bellinger? Yasiel Puig? Chris Taylor? Justin Turner is injured, so… Nope, it's Yasmani Grandal, Matt Kemp, Enrique Hernandez and Chase Utley.

Some of the Dodgers' key contributors from last year are inevitably going to shake off the early season funk and the return of Turner will help as well. There's certainly every reason to believe that the Dodgers offense, which was the 3rd best in MLB by fWAR last year, is going to improve from the 13th place position it is currently in.

As with the other favorites, we're talking about less than a month of play and it's too early to say anything with certainty (other than that Mike Trout is still the best player in baseball, obviously). Los Angeles' offense will likely come correct, and Los Angeles will be back on their seemingly inevitable path back to the postseason. If Jansen's issues continue, though, the Dodgers ability to make it deep into the postseason again might be on shakier ground.