Grading The Deal: Yu Darvish Finally Gets Deal With Cubs 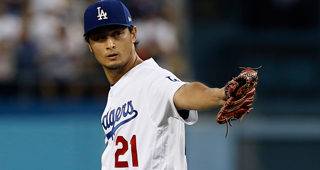 Over the weekend, my number one free agent of the offseason finally procured a deal, as Yu Darvish signed a six-year, $126 million guaranteed contract with the Cubs, which also features an opt-out clause, some no-trade protection for Darvish and some incentives. Before we move on to the breakdown, let's first take a moment to pause and reflect that the best free agent pitcher available this offseason finally signed less than a week before catchers and pitchers are set to report. This offseason…

If you weren't following Darvish's 2017 season and only just caught his couple of starts in the World Series, where he failed to make it out of the second inning in each (with a total line of 3.1 innings pitched, 0 strikeouts and 9 runs allowed), you might wonder why Darvish made the top of all these lists. Pay no attention to the small sample size gremlins of a best-of-seven series (which further may have been the result of some easily-fixable pitch-tipping) though, because Darvish has been one of the best pitchers in baseball since he came to MLB from Japan in 2012.

After getting Cy Young votes in 2012 and 2013, Darvish missed all of the 2015 season and big chunks of both seasons on either side of it thanks to a shoulder injury and the resulting Tommy John surgery. Despite missing almost two full seasons, however, he's been so valuable that he still manages to rank 22nd among starting pitchers by fWAR (19.0) over the six seasons since he came to MLB. That he's been so valuable a player despite missing all that time should give you an impression of just how good he's been.

If there was any worry that he wouldn't be as dominant upon his return from injury, he's certainly put that to rest. Since coming back in May of 2016, Darvish has a 123 ERA+ with 10.7 K/9, one of the best K/9 of any pitcher over that timeframe. That's not to say that he's not without risk, but that's the story with every pitcher to walk the earth.

Darvish joins a rotation that already featured Jon Lester, Jose Quintana, Kyle Hendricks and Tyler Chatwood, pushing Mike Montgomery back into a backup and supporting role. Darvish will take the (almost certainly, now) departing Jake Arrieta's place in the rotation and give manager Joe Maddon one of the best rotations in the National League to work with and pair with his young, enviable position player core.

While the Cubs didn't necessarily need to make a move this big, they did need to do something. They've failed to develop pitching internally as of late, but Cubs fans can't be too upset, what with the ring and the aforementioned core. That the Cubs chose to break the stalemate on Darvish certainly sends a twofold message to the rest of MLB: (1) they're ready for the 2018 season and (2) maybe y'all should sign some of these free agent pitchers now.

Grade for Darvish: B-

As with all of the other (relatively few) free agent signings we've taken a look at this offseason, we have to approach this one a little bit differently than we have in the past. While Darvish is going to be earning significantly less than was predicted heading into the offseason, it could be worse, I guess. The fact that Darvish's incentive bonuses are in fact tied to the Cy Young votes he receives is definitely a bummer for his earning capacity.

The recipient of the largest deal ever handed out in February, Darvish will at least have the option to opt out of his contract in a couple of years, but whether the market will correct itself by that time is another story. But at least he'll have a couple years of likely postseason appearances to redeem himself after those World Series duds last year.

Grade for Cubs: A-

The Cubs had to pay up in order to replace Arrieta in their rotation, but their decision to sign Darvish gives them one of the best rotations in baseball. The fact that they were able to sign Darvish for significantly less than expected is just another indicator that we're headed for some future labor relation issues. For now, however, it means nothing but good things for the Cubs organization, who now have one of MLB's premier rotations, all without giving up a draft pick or going over the luxury tax. The fact that it includes an opt out after a couple of years likely means that they won't have to pay for Darvish's decline. All in all, the Cubs looked primed for another serious run at October and are now unquestionably the cream of the NL Central.