Great Balls of Tire Fire: On the Nationals' Bullpen 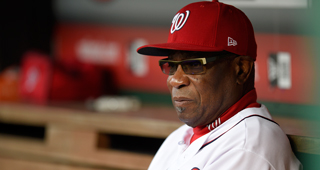 Thanks in no small part to the utter and epic collapse of the Mets this season, the Nationals have the clearest path to the postseason in the National League. Only the Houston Astros (12.5 game division lead) fare better than Washington’s 9.0 game lead. With one of the most potent offenses in all of baseball to go along with one of the best rotations, it’s no surprise that they’re currently on pace to win 97 games. But it’s not all sunshine, lollipops and adorable kittens. While whatever is going on with the healthcare bill might be a hot mess right now in the nation’s capital, it’s not the only one in town, because the Nationals’ bullpen is a big old pile of flaming tires.

In fact, the only positive spin you can really put on things when you examine the bullpen’s stats as a whole is that the Nationals’ bullpen has pitched 198.1 innings, the least in MLB, and the relievers for the next team, the Red Sox, have thrown almost twenty more innings (217.0). So at least Washington’s starters have been good enough that the bullpen has been working less than everyone else.

Six different Washington relievers have recorded a save this season and Koda Glover has the most, with 8. While his 2.67 FIP looks pretty solid and he’s one of the few folks in the bullpen without a home run problem (0.47 HR/9), he’s sporting a 5.12 ERA and still on the DL for back stiffness. 34-year old journeyman Matt Albers has been Washington’s best reliever, thanks to an enormous bump in his strikeouts (11.14 K/9 vs. 6.45 for his career) to go along with his high groundball rate (50.8% in 2017 and 52.3% for his career), and he’s got a shiny 2.03 ERA and a 3.03 FIP to show for it. After the two of them, though, things go from good/mediocre to really ugly very quickly.

While there are certainly going to be some options available come the trade deadline, it’s not immediately clear that there’s any sort of any easy fix here, because the bullpen isn’t just one elite closer away from turning things around. Ken Rosenthal floated Tigers’ Justin Wilson and Athletics’ Ryan Madson as likely targets. Wilson (12.84 K/9, 2.96 ERA, 3.50 FIP) has been having a good year for Detroit, but his .250 BABIP is well below his career .290, his HR/9 (1.32) isn’t going to solve that particular problem for Washington and it’s not even clear that the Tigers will even be sellers come the deadline. The A’s will certainly be selling, and Madson’s 0.64 HR/9 would be a definite improvement (along with his 2.54 ERA and 2.82 FIP) so he would certainly be a good pickup, but it’s not as if Washington will be the only team vying for his services.

Mark Melancon would also be a possibility, as the Giants certainly don’t need super-expensive closer this season. While his 4.82 ERA is deceiving thanks to a super-inflated .362 BABIP and a 17.6 HR/FB% that are way above his career numbers, it’s not clear that Washington would be willing to take on the contract, otherwise they would have re-signed him in the offseason instead of letting him head to San Francisco.

To be honest, it’s not entirely clear what sort of path the Nationals’ front office should take at this point, especially with the AL Wild Card race being such a mess, and so many surprise contenders still in the mix in both leagues. The obvious answer is that they shouldn’t be in this predicament in the first place. The only other contending team with a bullpen that’s anywhere near as bad is the Twins, and you can’t really blame them since they more or less stumbled into contention.

Unlike the Twins, the Nationals were primed for a repeat postseason trip, but they didn’t do anything about their closer situation or bullpen depth and, while we sort of saw this coming, it’s still disheartening to hear about the front office’s decision making and the effect it’s having on the team. The Nationals are still one of the best teams in baseball and are pretty much a lock to make the postseason, but the 2016 Giants’ postseason should serve as a very recent reminder of how a struggling bullpen can burn you in a winner-take-all series. Washington had better hope that the standings sort themselves out ASAP so that some more relievers are available come trade-deadline-time, otherwise we may have another postseason cautionary bullpen tale very soon.