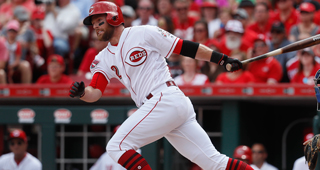 Zack Cozart’s 2017 season has been on the “Walk-Year; Must Write About” list for a minute. Inevitably, as soon as I decide put on the writing gloves, I learn that it’s the day after a quad strain sends him to the DL. We shan't just forget about him, though, what with the draft in the rearview and all of us firmly in trade speculation season. After all, his injury doesn’t take him off the trading block, it just throws a bunch of wrenches in the old speculation wheel.

Cozart, who will turn 32 in August, has been a valuable enough player (when healthy) to keep him in the lineup since his first full season in 2012. While he’s hit .245/.289/.383 over those five full seasons (not exactly numbers you dream on) the fact that he plays a premium defensive position and fields it like one of the best in the game means that he’s still been able to average 2.2 bWAR per season. Those numbers are even ever-so-slightly tempered by the fact that, when he was having his best season as a hitter (.252/.308/.425) in 2015, he only played 53 games thanks to an awful knee injury which sidelined him for most of the season.

This year, though, it appears that he flipped a switch, and is hitting .320/.404/.562 and moving beyond player-who-deserves-to-play-everyday territory and skipped a couple of levels. For position players, he is 7th in MLB by fWAR (2.8), 5th by bWAR (2.9), 10th in AVG and 6th in OBP. His defensive stats suggest he’s still excellent, and, if he returns quickly from his injury, he will end up as one of the best all-around players in baseball this year, assuming his hitting doesn’t fall off a cliff.

One warning sign that he might be due to go full Thelma and Louise is that his BABIP currently sits at .367, which is not just a high BABIP to begin with, but is also light years beyond his career BABIP of .282. His 15-game rolling BABIP graph shows just how much things have changed this season, and also how much we’ve already witnessed a decline from earlier in the season (when Cozart was arguably the best non-Trout player in baseball). If Cozart’s BABIP were the only thing to change, we could probably write this off as an extremely lucky season, but his BABIP hasn’t been the only change this season.

Cozart’s BB% is at a career high of 12.5%, over twice as high as his career average 5.9% walk rate, and he’s well past the point where that stat stabilizes. He’s been showing a vast increase in selectivity at the plate and swinging at far less pitches outside of the zone (24.7% vs. 29.2% for his career). While his BABIP suggests that there’s some room for him to fall back to earth a bit, there have been some real changes to Cozart’s approach which suggest that he might be a far superior hitter than he was to date.

All of this brings us to the next interesting question, and one that we’ll no doubt be hearing about until the trade deadline, because Cozart has not only been one of the best players in baseball, but has done so on a not-surprisingly non-contending team. Unlike teammate Joey Votto, who is also having an excellent season, but will likely still be playing for Cincinnati for many, many millions of dollars until the universe expands too far and collapses on itself, Cozart is a free agent after this season and is only making $5.325 million this season, making him one of the most tantalizing players (if not the best) available before the trade deadline.

But what about finding him a home on a team that (a) needs a shortstop and is in serious contention or (b) is sort of contending and is maybe a Cozart away from a deep postseason run? That’s where things get a little tricky. While the Reds unsurprisingly lead MLB by fWAR at shortstop, most of the truly contending teams are high enough up that list that they won’t be looking to upgrade there before the deadline and those that aren’t have young players that they’re not likely to be giving up on at this point (the Nationals’ Trea Turner, Cubs’ Addison Russell and Rockies’ Trevor Story). The only team that is in the upper echelon of running for postseason spot with realistic need at shortstop are the Diamondbacks (where Chris Owings and Nick Ahmed have been absolutely acceptable).

While there are some contenders currently in the Wild Card hunt (see: especially the Blue Jays and Orioles) where shortstop is a black hole in the lineup, there’s a real possibility that one of the best players in baseball this season who will certainly be available come the trade deadline might not be that tantalizing of tradebait, especially now that there are some question marks about his health.

Sad hat tip to the fact that it just seems like the Reds keep on getting absolutely hosed when it comes to optimizing their trade value as of late, whether it was that darned Brandon Phillips no-trade clause or getting shafted when the Yankees bought low on Aroldis Chapman and then cleaned up when they sold him off to the Cubs last season. Between the new injury, the lack of need and potential skepticism as to whether his improvements are real, there’s a real chance that Cozart might not fetch much of a return come the trade deadline. Hopefully, he will come back in a week and continue doing what he’s been doing and help the Reds actually catch a break when it comes to their rebuild, but nothing is certain at this point, which is pretty crazy when you consider just how good Cozart has been this season.