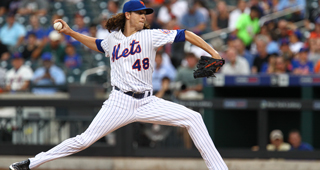 Jacob deGrom could return to the mound for the New York Mets as soon as Sunday against the Arizona Diamondbacks.

deGrom had soreness in a back muscle after his last outing on April 28 and was scratched from a scheduled start on Tuesday night. He said he intends to play catch Thursday and hopes to get the go-ahead for a bullpen session Friday.

Luis Rojas said that a successful bullpen on Friday would put deGrom on track to start Sunday.

"I was a little bit more sore after my last start. Didn't think too much of it," deGrom said. "I noticed my mechanics were off. Looked at some of the video and got some of the numbers, and my arm was down a little bit and ... flying open. So that's obviously going to put more stress on my arm."