Hank Aaron Passes Away At 86 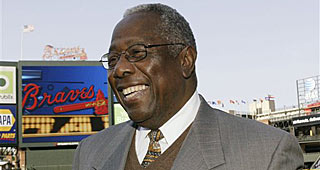 Hank Aaron has passed away at the age of 86.

"We are absolutely devastated by the passing of our beloved Hank," Atlanta Braves chairman Terry McGuirk said in a statement. "He was a beacon for our organization first as a player, then with player development, and always with our community efforts. His incredible talent and resolve helped him achieve the highest accomplishments, yet he never lost his humble nature. Henry Louis Aaron wasn't just our icon, but one across Major League Baseball and around the world. His success on the diamond was matched only by his business accomplishments off the field and capped by his extraordinary philanthropic efforts.

"We are heartbroken and thinking of his wife Billye and their children Gaile, Hank, Jr., Lary, Dorinda and Ceci and his grandchildren."

Off the field, Aaron was an activist for civil rights, himself being a victim of racial inequalities.

Aaron was awarded the Presidential Medal of Freedom in 2002.