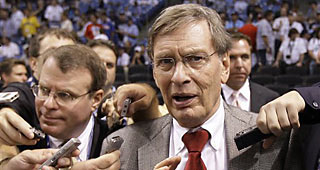 A handful of Major League umpires will work in the World Series for the first time next week.

The seven-man crew includes a rare four newcomers, according to a source.

Hunter Wendelstedt, Eric Cooper, Jim Reynolds and Jerry Meals will be the first-time umpires in the Fall Classic.

Jeff Kellogg will be the crew chief and call his fifth World Series when Kansas City hosts San Francisco in Game 1 on Tuesday night. Ted Barrett and Jeff Nelson will work the Fall Classic for the third time.