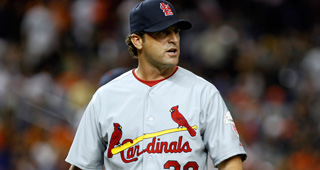 Matt Carpenter hit a home run for the third-straight game as the St. Louis Cardinals topped the Los Angeles Dodgers on Monday night.

Carpenter is just the sixth player in history to homer in his first three games of a single postseason.

He also became the first Cardinal to homer in three consecutive games in a single postseason series, and only the second to go deep in three straight in the postseason overall.

"I feel really good at that plate right now," Carpenter said. "Throughout the regular season, I wouldn't say it was a struggle, but I never really went through a stretch that I felt I was really hot. I just felt like I was just having consistent at-bats."