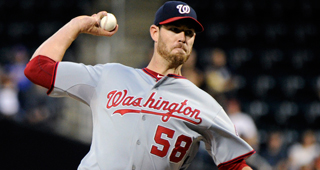 Doug Fister pitched seven shutout innings on Monday as the Washington Nationals fought off elimination against the San Francisco Giants.

Fister lowered his postseason ERA to 1.78 as a starter, the fourth-lowest in Major League history by a starting pitcher with at least seven starts.

The Nationals defeated the Giants 4-1 after a pair of one-run defeats in the first two games of the NLDS.