Edmonds Among Four To Enter Cards Hall Of Fame 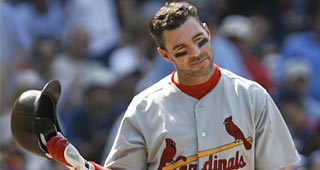 Four players have been selected for enshrinement in the recently-opened Cardinals Hall of Fame.

During an on-field ceremony Wednesday, the Cardinals announced that Willie McGee and Jim Edmonds would be the two modern inductees.

Marty Marion was chosen as the veteran inductee by a panel of team experts. Mike Shannon, who has been with the organization for 56 years as a player and broadcaster, was selected by the organization as the final member of the 2014 class.

The four of them will be officially inducted into the club's Hall of Fame during a ceremony on Aug. 16.