Giants Could Permanently Move Brandon Belt To No. 3 In Lineup 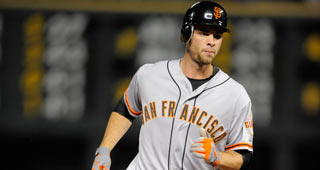 The San Francisco Giants believe Brandon Belt could become their No. 3 hitter permanently.

Pablo Sandoval has been a slump throughout the early part of the season.

Bruce Bochy said Belt could be a “stabilizing” presence at No. 3. Belt said that’s where he wants to hit.

“We’ll see how it goes here, but at some point he could go in the three-hole and stay there,” Bochy said during batting practice. “We’re going to stick with this plan now. He an (Hunter) Pence are going to go back and forth (in the second spot).”